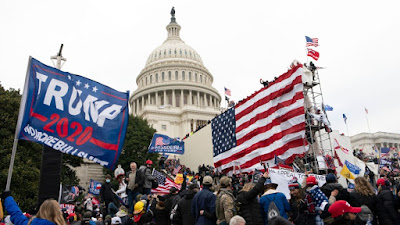 Expressions of insanity appear now all the time. A commentator on my friend Xerxes’s latest column says “January 6 was the day the Republican Party illustrated its true purpose—white supremacy.”

There were probably more genuine communists in the State Department back in Joe McCarthy’s day than there are white supremacists in the entire US today. I have never encountered one, in person or in print, although I have not gone looking. They used to be around, but probably not since the 1960s.

I have seen nothing in the Republican Party on January 6 or any other day that would suggest even tolerance within its ranks for such a view. I recall when Trent Lott was drummed out of the party leadership for a muted suggestion that the Dixiecrats were right back in 1948. While not necessarily “white supremacist,” the Dixicrats—a faction of the Democratic Party of the day—were segregationist. A position still heard in the Democratic Party today, but not among Republicans.

Of course, it is also debatable whether those who illegally entered the capitol building were, indeed, Republicans. Whether they were or not, there is no evidence whatsoever that they did so because of a belief in “white supremacy,” as opposed to a belief that the recent election had been stolen. Had they or even any faction of them indeed been interested in demonstrating in favour of white supremacy, one would have expected at a minimum the publication of a manifesto.

The simplest explanation for this comment is simply that the author of it is insane, in the proper sense of the term. He is completely disconnected from external realities.

Another leftist comments, in alarm, referring still to the events sin Washington on January 6th, “there are, at the last count I could find, 165 well-armed civilian militia groups across the U.S.” This is actually what the framers intended with the Second Amendment: it was to ensure the existence of “a well-regulated militia.” There is nothing sinister about a militia per se, except to a government up to no good. A well-armed citizenry was understood by the framers to be, and is, a protection against abusive government.

Said commentator writes “all it takes is incendiary speech from misguided leaders to ignite them”—i.e., the militias. If he is referring to January 6, there is no evidence that any militia was involved. Nor that the people who did enter the capitol illegally were inspired by any particular speech. Those who did enter the building did so only minutes after Trump finished his speech, some distance away. They could not have been listening to it. Moreover, there is much evidence online that their invasion of the capitol was planned in advance.

This commentator, too, seems to be delusional; or at least badly misinformed.

He writes, of Republican objections to now being scanned by metal detectors on entering the building, “Can you imagine wanting to carry a concealed handgun into a congressional chamber?”

I can. Mass shootings usually take advantage of gun-free zones. The certain knowledge that no representatives are armed makes them sitting ducks.

As to being concerned about the representatives themselves acting responsibly, these are the people chosen by their peers as the most responsible in their communities, and entrusted with the powers of government, including the power to declare war. Nobody has the authority to overrule the vetting of the people. To demand that authority is itself an attempt to usurp the government; it is a coup attempt.

Another respondent finds it “chilling” that some right-wing outlets are openly suspecting Joe Biden of being a “socialist radical.” This leads her to the conclusion that “the virulence and irrationality of the opposition is very frightening.”

During the recent primaries, Bernie Sanders was Biden’s chief opposition within the Democratic Party; it looked in the early going as though Sanders was going to take the nomination. It seemed to take some fast work in the backrooms to grab the nomination instead for Biden.

It follows that a large proportion of the Democratic Party, perhaps a majority, is socialist in their allegiances. And they have just been elected into power. It is reasonable to at least suspect that Biden either agrees with them, or has cut a deal. It is certainly exponentially more plausible a suspicion than that the Republican Party is “white supremacist.” Literally nobody in the Republican Party, I warrant, would say they are a “white supremacist.”

Another commentator actually quotes Trump telling the crowd on January 6th “to ‘get’ Pence if he didn't stop the certification process.”

The transcript of his speech, which is available online, shows that Trump did not say this, or anything like it. The quotation is either deliberately invented, or hallucinated.

The characterization, common throughout the left, of the illegal entry into the capitol building as an attempt to seize control of the government seems similarly delusional—indeed, paranoid. Few of the civilians present seem to have been armed. As your correspondent notes, they had no plan for any alternative government.

By this standard, any political demonstration could be characterized as an attempt to seize control of the government.

The left likes to stress that five people died during the event—as if this demonstrates that it was a violent attempt to seize government. CTV News refers to it in headlines as "the deadly capitol riot." They do not note that four of those five were demonstrators. One woman shot dead by capitol police. Of the other three, one man died of a heart attack; another of a stroke. One was trampled in the crush. These are the sort of things that might happen in any large gathering, especially of relatively elderly people. The officer died the next day of a stroke. As far as we can tell, the worst he suffered at the hands of demonstrators was being pepper sprayed. His death may or may not have been related to the stress of dealing with the protesters.

What are we to make of the fact that a large proportion of the general public seems to have gone insane? How can we respond?