Captain Capitalism on Men's Place in the World

Captain Capitalism: When Men Leave the Market
Posted by Steve Roney at 2:09 AM No comments:

The Irish of Canada

Posted by Steve Roney at 3:06 AM No comments:

Email ThisBlogThis!Share to TwitterShare to FacebookShare to Pinterest
Labels: Irish

It's Only a Westernized Elite

When the young people gathered in Cairo's Tahrir Square, my Middle Eastern friends assured me, and so did the BBC and CNN, that this was only the educated, Weternized, urban young. Out in the countryside, it was likely that everyone lstill loved Mubarak.

A few days ago, both my Middle Eastern friends and the BBC were saying almost the same thing about Libya and Ghaddafi. Okay, the folks in Benghazi didn't like him; but he was wildly popular. It was just a tribal conflict. They would never riot in Tripoli.

My Middle Eastern friends have been saying the same, of course, about Iran for years. Even though everyone I know who has actually been to Iran in the last few years comes back saying they cannot find anyone who will admit to supporting the Ahmedinejad regime. But my Middle Eastern friends assure me quite forcefully that he is very popular. The people love him; the people support his programme. It is only a few Westernized, educated urban types who are rioting in the streets.

And they belive the same about China, my Middle Eastern friends.

But surely the flaw in this logic is obvious. My English-speaking, professional, well-educated Middle Eastern friends—they are themselves precisely the type of people they are insisting is pro-Western and anti-regime. So are the Middle Eastern reporters on the BBC. And if you meet this type, you find them to be, like my friends, actually resolutely anti-Western and pro any leftist regime. Something here has gotten reversed.

Yet this is what one would expect: that they would be anti-Western and pro-regime. After all, these urbanized, educated types are the ones doing best in the system as it is; why would they oppose it or want to overthrow it? They are the ruling class. Moreover, as the ruling class, they have every reason to scapegoat the West. If everything is not the West's fault, if the West is not secretly controlling everything, then they are in power and in charge; the necessary alternative is then to blame themselves.

And so when we see protesters gathering in urban squares in countries like Egypt, Libya, China, or Iran, in any generally underdeveloped country, and they seem to be well-educated and articulate in English, we are very wrong to suppose this represents only a tiny minority of opinion. It does, in a sense—but it represents the ruling class. This is especially true in a leftist regime, becuase leftist regimes councentrate power in the urban, well-educated, which is to say the bureaucratic, class.

It is pure leftist fantasy, if not a conscious lie, to suppose that the poor support leftist regimes and oppose rightist regimes. The poor, whether in city or countryside, essentially always support regime change. If you are poor, there is nowhere to go but up, so any change is likely to be an improvement. And the poor are by definition those who are not doing well under the present regime.

So when we see this wealthy, well-educated, Westernized, urban elite too turn against the regime, in particular if it is a leftist regime, we see a regime that has lost the support of even its natural constituency. It is a pretty likely sign of a regime in its death throes.
Posted by Steve Roney at 10:21 AM No comments:

Muammar Ghaddafi has recently appeared on Libyan TV, for only 15 seconds, apparently solely to prove to Libyans that he is still in Tripoli, not in Venezuela or some other part of Libya. 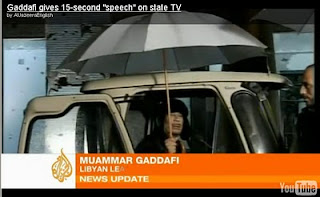 So how do we know the video was indeed shot in Libya? Two reasons, according to Al Jazeera: first, because Ghaddafi is holding an umbrella, and mentions that it is raining. It was indeed raining in Tripoli last night, a fairly rare occurrence for Tripoli. Second, the building behind him is shown in some detail, as if to make sure it is recognizable, and is apparently a museum in Tripoli.

Two things make me wonder, though. First, Ghaddafi is holding up an open umbrella even though he is sitting inside the cab of a truck. He obviously has no need for it—methinks therefore it is a calculated prop. Second, the building behind him is apparently made of brick, yet there is a strong glare on the brickwork directly behind Ghaddafi from what appear to be studio lights. Brickwork does not produce glare; but a photograph would. The shadows also seem to fall on it flat, as if the building has no contours or even texture. In other words, it looks as if the building behind him is really a backdrop photograph set up in a studio. That studio could be anywhere, including Venezuela.

Posted by Steve Roney at 7:20 AM No comments:

I am struck by how stupid the Egyptian Mubarak regime seems to be, particularly about public relations. But I shouldn't be. First, bad people are almost necessarily stupid people. Second, an oppressive regime almost inevitably loses all its survival skills over time by never having to fight for survival.

Their worst move yet was, now that all the televisions in the world had been trained on Tahrir Square, and everyone had started to identify with the protesters, to send in armed thugs--in full view of the cameras--to rough them up. Before that, Mubarak might have had a chance to hang on until September, and at least have chosen his own successor. Now, he'll be lucky to last a couple more days. Even if the governments of the US, UK, France, Germany Turkey, and so on, secretly wanted Mubarak to stay and feared the alternative, they need, being democracies, to heed popular opinion at home. And because Egypt currently relies on massive foreign aid, this matters in Egypt too.

Their second dumbest move was for the Prime Minister to publicly blame foreign news channels for at least some of the troubles, and to have the police start to rough up journalists. What could be dumber than to expect journalists not to report a story that makes them look like heroes, to their audience and to their boss? But at the same time, they have ensured that, given any possible chance to spin the reporting of events to the government's disadvantage, they will.

Really, these people are not fit for office on grounds of intelligence alone.

As to the protesters and how broadly backed they are, I can testify that they at least seem broadly backed by the Arab man in the street generally. I know this from conversations over the past few days with Bahraini cab drivers. Cab drivers, like barbers, are great for a quick reaction from the general public. There is no sympathy for Mubarak there; and the issue in their mind is clear, and can be expressed in one word: "corruption."

Mubarak's peace with Israel, or the idea of an Islamist state--that seems, in the minds of ordinary Bahrainis at least, to be purely a red herring. A fear Mubarak and his group is able to exploit just as South Africa's apartheid rulers, or Hitler, were able to exploit fears of Communism. According to my taxi drivers, religion is never a casus belli. Religious hatred is just something corrupt Middle Eastern rulers like to exploit to distract attention from their corruption. (This does not mean, mind, that the Arab man in the street is reconciled to Israel, itself in a sense a religious state).

Ripples: Algeria's president has promised now to lift that nation's eternal state of emergency. If Mubarak ends up being bundled onto a plane, as it appears will happen, those ripples will probably reach further.

Posted by Steve Roney at 1:47 AM No comments:

Email ThisBlogThis!Share to TwitterShare to FacebookShare to Pinterest
Labels: Egypt

An interesting piece on the political power of art.
Why Dictators Fear Artists
Posted by Steve Roney at 1:21 AM No comments: