Whatever Happened to RD Laing?


I cannot pass a dollar book bin without looking in. Not long ago, I came across one in front of a bookshop in Windsor's Walkerville. I dredged up a papeback copy of RD Laing's The Politics of the Family.

Whatever happened to RD Laing? He was the most famous psychologist of the Sixties, as well known as Jung or Freud. Now you hardly even hear the name.

Laing's basic idea was that “mental illness” was not an illness at all, but a coherent response by an individual to an impossible situation. Most often, this was a situation within the family—in effect, the family was mad, its solidarity built on a lie, and one or more individuals within it were sacrificed to sustain the delusion. Laing's brilliance was in analysing the way people can be caught by social situations in “double binds,” in which, whichever choice they make, they are in the wrong. This is the essence of abuse. Depression or even psychosis was the result.

A recent discussion of Laing in the Guardian prompted a lot of comments, which seemed to fall into two groups: comments by professionals claiming that Laing had been disproven, and comments by those diagnosed as mentally ill, or their friends, insisting that Laing was spot on in their own case, or that of their friend.

I don't think Laing has been disproven at all. He was eclipsed, certainly, by a move in psychiatry, encouraged by genetic science, and peaking in about 1990, to ascribe absolutely everything (notably including homosexuality) to genetics. It was the fad of the day, just as everything, including mental illness, was once ascribed to electricity. But since then, the tide has turned, and the actual evidence is piling up that Laing was on the right track all along.

Unfortunately, Laing did not help his own cause. Starting in the early seventies, he seemed to lose interest in his thesis, and indeed to backtrack. He got involved instead in eastern meditation, poetry, alcohol, and rebirthing therapy. I saw him lecture in about 1973, and he already seemed off the rails: instead of talking about psychology, he gave a rambling argument against abortion. A stand that seemed perfectly calculated, of course, to lose him all his political support, which had been on the “New Left.”

Here's what I think happened: both Laing and psychology in general backed away from the Laingian explanation for “mental illness” not because it was wrong, but because it was politically risky. Anyone who does not believe that politics is a major consideration in the field of psychiatry does not know the story of how homosexuality went, in a weekend, from being a treatable mental illness to an unalterable element of self and a human right.

The sad truth is that you can say or do anything you want about the “mentally ill.” They are powerless. But if you say anything against their families, you are bound to get one hell of a political backlash. These are people capable of defending themselves, and in their eyes, if, as Laing believed, they are delusional, you are slandering them. A lot of the “mentally ill” come from highly respectable, indeed prominent, families. This may even be the norm.

And there's worse. If families can drive one or more of their members mad with “double binds,” so too, logically, can other social groups of all kinds: churches, neighbourhoods, governments, employers. This means that 1) some accused families might indeed be quite innocent, the fault lying with another level of social interaction, and 2) you are implicitly challenging all centres of social power—all political entities—with this thesis.

Laing himself saw this logical implication, and was courageous or naive enough to level the accusations, in The Politics of Experience, against society as a whole.

Moreover, 3) as a practical matter, neither individual families nor society as a whole are likely to change. So even if Laing's thesis is exactly right, it is not of much commercial value: it leaves psychiatrists and psychologists with nothing to sell.

Certainly reason enough for the profession of psychology/psychiatry to back away from the whole area of enquiry, at least for a generation. Too dangerous to a group of people who, in the end, put their first priority on their own social status and large incomes. And I expect also reason enough for Laing himself to back away—into eastern mysticism, prevarication, the literary approach, and generic “rebirthing.” These are exactly the evasive tactics I would expect in these circumstances. As it was, his controversial stands earned him a persistent rumour that he himself was schizophrenic, and cost him his medical license. 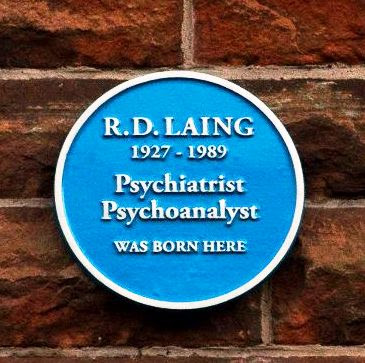 But in the end, all he was saying was what the New Testament has always been saying. And Christianity is presented there as the specific cure.

And Now for Something Completely Different...


I bought my daughter a big bag of rubber ducks for her birthday. Usually, she names everything, and gives them an imaginary character. This time, the sheer numbers overwhelmed her.

Just for fun, trying to help out with as many rubber duck names as I can muster:


There! Now they all have a name!
Posted by Steve Roney at 5:51 AM No comments:

So much for “family values,” eh? Not a Christian concept—rather, something a lot of people think is good, and so they assume it must be in the Bible although it is not there. Like prohibition. Jesus is actually saying that the express effect of Christianity, followed properly, will be conflict within the family.

Of course, families vary widely in their morality. Some are hellishly evil, and some are relatively good. When civil government is bad, the family can be an invaluable support. And, like civil government, families are a practical necessity.

Let’s just not fall into any idolatries here.
Posted by Steve Roney at 2:03 AM No comments:

There are many studies that show that the average parent can teach far more effectively than the average teacher. This article from Salon goes further. It argues that doing nothing produces at least as good a result as sending a kid to a public school.

"the more scientists have learned about how children naturally learn, the more we have come to realize that children learn most deeply and fully, and with greatest enthusiasm, in conditions that are almost opposite to those of school."

Posted by Steve Roney at 8:08 AM No comments:


I might have posted this before. It is worrisome. Not just for what it says about the schools and their effect on boys, but about the probable objectivity of women in authority generally, and of their probable discrimination on other grounds than sex as well.

Women are by their nature partisan--as Rudyard Kipling famously pointed out in his poem, "The Female of the Species is More Deadly than the Male." They are bred by evolution to be, because of their primary task of nurturing and protecting children. You do not want to disturb a female bear with cubs.

It follows that women placed in positions of authority will be partisan, which is to say, unjust. They will have favourites. They will discriminate. It follows that it is generally a bad idea to employ women as teachers, judges, managers, CEOs, or legislators.

Posted by Steve Roney at 6:39 AM No comments:

I strongly suspect this is true, and have been waiting for it. Most writers write as a matter of compulsion. So it seems to me unlikely that JD Salinger was not writing all those years since "Hapworth."

Of course, the writing might be drek. But I think the odds are that it is good. By ceasing publication and waiting until his death, Salinger seems to have been trying to free himself to write with absolute sincerity and without any distracting ulterior considerations.

The history of posthumous publication is an encouraging one. It includes the Aeneid, Emily Dickenson's entire production, Wordsword's Prelude, Kafka's The Trial, The Canterbury Tales, Doctor Faustus, Faust, and The Dream of the Red Chamber.

I should write so well after I'm dead.

Posted by Steve Roney at 2:39 AM No comments:

Revisiting Wolfe Island, Ontario after many years, I discover it is now one huge “wind farm.” The flat terrain and the surrounding lake are apparently ideal for wind turbines.

Approaching in the Wolfe Island Ferry, my six year-old say the turbines, and spontaneously remarked, “It’s the end of the world.” My first thought was William Blake’s reference to “dark satanic mills,” in “Preface to Jerusalem.”

Apart from the noise pollution of the turbines, and the fact that they kill birds, and generate little power, I think the visual damage to the landscape is an important consideration. This falls under the heading of feng shui, the Chinese art and science of ergonomics. Symbolically, wind turbines or wind mills are very dark. They represent an attempt to harness the spirit (the root word and image here is “wind”) for materialist purposes. This is the definition of black magic, of conjuring.

This may seem trivial in in itself to a materialistic mind set. But, whether we are conscious of it or not, such symbolic implications register emotionally, and can generate an overall feeling of unease or disquiet, which can build up over time and have a serious effect on our quality of life. The intelligent awareness of such subconscious messages is why a Chinese or Japanese tea garden can seem so restful.


Interestingly, by contrast, a water mill or water wheel is symbolically pleasant and peaceful. Water is emotion, time, and change. Symbolically harnessing and regulating it in such a way suggests tranquility, like the regular turning of the seasons.

We ought to engineer with these considerations in mind.
Posted by Steve Roney at 2:07 AM No comments:

Reflection on Visiting the Montreal Museum of Fine Arts

A basic principle of modern art: the larger the canvas, the smaller the talent. It is a simple thing to achieve impact just by drawing something very large. Everybody is doing it these days. It is fantastically tedious.

A similar principle applies in rock music: the greater the volume, the lesser the talent. As Keith Richards has noted, the essential trick of rock is to achieve an impression of power without resorting to volume.
Posted by Steve Roney at 1:23 AM No comments: