For anyone who doubts that Benedict XVI is resigning the papacy for health reasons, witness this recent picture.

Unlike John Paul II, Pope Benedict is an introvert. As a result, the official duties of the Papacy must have been a terrible strain for him.

Thanks to The Anchoress for the link.

Posted by Steve Roney at 7:40 AM No comments:

Spengler on the Coming Conclave

A fascinating take on who should be the next pope from a Jewish writer.
Posted by Steve Roney at 4:21 AM No comments:

The War on Dads

Depressing reading.
Posted by Steve Roney at 7:23 AM 1 comment:

I have a bit of a problem during Lent. As a vegetarian, I've already given up meat year-round. So I used to give up alcohol for Lent. But now that I live in Saudi Arabia, I've given that up year-round too...

The Daily Beast noted that the conclave, in choosing a new pope, would have to take into account the fact that two thirds of Catholics now live "in the Southern Hemisphere." I don't know of any source that breaks this down by hemisphere, but a quick glance at a  globe shows how absurd this is. This would be tantamount to saying that two thirds of Catholics live in the lower two thirds of South America and Australia. Most of Africa is in the Northern Hemisphere. So are two of the three largest Catholic countries, Mexico and the Philippines. See this map.

Posted by Steve Roney at 2:06 AM No comments:

Why US Productivity Has Stalled


According to a recent podcast from Freakonomics radio, something has gone wrong with American productivity. It rose strongly and steadily for about a hundred years, from 1870 to 1970, but then for some reason has flatlined ever since. If this does not change, America’s gravy days will soon be over. And economists cannot figure out what has happened. This story from the Economist says the same.

This is particularly odd because the current wave of digitization ought logically to be producing historic boosts in worker productivity. Just think how much time and energy is saved, for example by things like ATMs, email, and product codes. Yet worker productivity is decelerating?

There is, it seems to me, one obvious explanation, and it is not seen only because it is too politically incorrect. The slowdown in productivity has corresponded pretty exactly to the flood of women into the workforce. Women are simply significantly less productive than men.

The proof of this, actually, is the fact that traditionally, married men have been paid more for the same work than were women. This would be economic suicide for any large business in a free market if men and women were equally productive. The next company could then undercut them by outbidding them on better (female) employees.

But for a variety of obvious reasons, this is not so. Women do not need the job. They are doing it so long as it is satisfying and fun. Getting the job done tends to come second.

Government-mandated affirmative action short-circuits this, forcing everyone else to subsidize female employees. But this cannot change the productivity figures. This works well enough internally so long as government prevents a free market. But the problem, just as with unionized labour, is that any outside jurisdiction can clean up by operating outside these legal restrictions.


Indeed, were it not for the digital revolution, we would probably be seeing an absolute decline in US worker productivity, and in productivity throughout the West. Instead, the massive gains this ought to give us are being mostly wiped out.

Hence, the current economic stagnation and slow economic decline of the West.
Posted by Steve Roney at 7:58 AM No comments:

Why the Traditional Media Are Dying 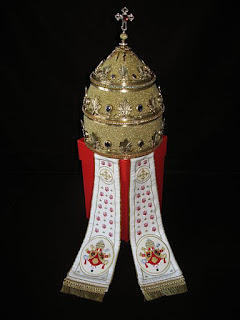 News reports surrounding the resignation of Pope Benedict have been predictably horrid. The profound ignorance of all things religious among the journalists is one thing, but why do they not have editors to check even basic facts? This looks not just like incompetence, but idiocy.

Watching Al-Jazeera English service; in announcing the resignation, they refer to Benedict’s pontificate, gratuitously, as “one of the shortest and most turbulent in history.”

One of the shortest? He’s been pope for almost eight years. Average reign of all popes: 7.2 years.

One of the most turbulent? Try the popes of the Great Schism, the Avignon Captivity, or the Reformation. Benedict’s reign was not even one of the more turbulent of the last century, which has seen two world wars, Nazism, Communism, Vatican II and the SSPX.


When he took office, Pope Benedict’s well-known stands included the assertion that Catholicism is “true” and other religions are “deficient;” that the modern, secular world, especially in Europe, is spiritually weak; and that Catholicism is in competition with Islam.

Posted by Steve Roney at 4:29 AM No comments:

My first reaction to Pope Benedict's resignation was to be very unhappy. I believe Benedict is probably the smartest man alive today, certainly the smartest in any position of prominence. It is a sign to the world that such a man is pope.

On the other hand, I deeply sympathize with his personal position. For a man who is so intelligent, the Papacy must have always been torture. Too much time taken away from thinking for mere administration. And the constant need to hold his tongue because of the PR requirements of the job.

This being so, it may not only be best for Benedict personally, but best for the world, if this mind and this voice is unleashed from the demands of the Papacy.

The first thing I hear now from non-Catholic colleagues is, "So I hear now there may be a black pope."

The men selecting the new pope are old men, and old men are conservative by nature. They are in charge of a ship that has two thousand years of tradition. They are not interested in news value. They are most concerned with a steady, reliable hand at the helm.

In addition, the current cardinals were mostly chosen by the present pope. They will reflect his theological point of view. Moreover, with the present pope still around, they are not going to choose anyone else who will disagree with the current pope on any substantial matter. That would be inconsiderate, in the first place, and might cause scandal.

They will no doubt choose an African if one best fits this description. I wouldn't give odds.
Posted by Steve Roney at 2:19 AM No comments:

The Politician as Clown


For some reason, I feel warm feelings about a fair number of Canadian politicians, despite the general sense that they are rascals. It is hard for me, and I think for Americans, Brits, Germans, or French, to have the same fondness for any of their politicians, perhaps because the stakes are higher.

But the lovable scoundrel seems to be the default image of the politician in Canada. Starting with the legendary alcoholism, and political wheeling and dealing, of our founder, Sir John A. Macdonald. A stark contrast with the imagined moral perfection of George Washington. We Canadians love Sir John A., but do not particularly respect him. Or tradition is of the politician as clown, as comic entertainment. We have a comic culture.

That's what the federal Liberals need if they hope to get back into the fight. They need someone we can all laugh at.
Posted by Steve Roney at 2:30 AM No comments:

The Death of the Professions


The numbers in this article are startling.

The tide is going far, far out.

I did not expect to see this sharp decline in law yet—I thought medicine was more vulnerable. But nobody comes from China or the Middle East to the US to study law, because American law does not apply back home. So the law schools are being hit by a student shortage that is masked in other disciplines by rising numbers of international students.

It seems that, with so many legal forms available online, and with Internet search capabilities, a lot of the traditional lawyer’s job is no longer necessary.

Makes me wonder what we are all going to do for a living here in North America, with manufacturing all gone overseas, service gone to call centres abroad, storefronts closing due to Internet shopping, and the professions being replaced by the internet.

The obvious answer is that we are all going to work on the Internet. But there will be no more advantages to simply living in North America—you can log in just as easily from Mumbai as Manhattan.
Posted by Steve Roney at 2:38 AM No comments:

I polled my students today for their favourite genre of film. I was surprised. I had expected “action/adventure” to win going away. It always had before. Instead, this time, there was a heavy preference for horror. This has changed just in the past year.

But then, you can see the growing popularity of horror everywhere. This is not just a local thing. Zombies, vampires, Hunger Games; it’s the current fad
.


Interesting, because the golden age of the horror film was 1931 (Frankenstein) to 1946 (Abbot and Costello Meet Frankenstein)—a period that corresponded to some real-life horrors. The Great Depression, but probably more significantly, the rise of Fascism/Nazism. It was the fear of events in Europe, some say, that caused the hysteria around Orson Welles’s production of The War of the Worlds in 1938. At another time, no one would have taken it seriously. There was a sense of foreboding in the air, a sense that all hell was about to break loose.

The paranoia dissolved in laughter as the Second World War was won.

Art is like our dreams; it reveals what we are unconsciously pondering. Right now, we have a lot of misgivings about the future, just as we did then.

I think we all know something is about to happen.
Posted by Steve Roney at 7:22 AM No comments: