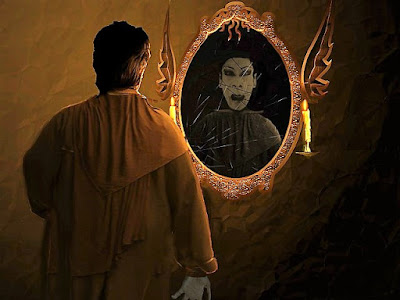 Scott Adams, in his daily podcasts, has pronounced himself puzzled by the apparent truth of an insight from Tucker Carlson: that whatever the left accuses the right of doing seems to be just what they have been doing themselves.

They accuse Trump’s followers of trying to stage an insurrection; they use this as an excuse to try to stage an insurrection. A second or third insurrection, following the Russia hoax and the Ukraine impeachment. They accuse Trump of encouraging rioting; after a year of encouraging rioting. They accuse Trump of authoritarianism, for considering calling in the National Guard to protect the White House under siege, or for considering calling in the Guard to cities torn by rioting. As soon as they are in power, they call in the National Guard to protect Washington, and keep them there. And plan to impose COVID regulations on the states. They accuse Trump of colluding with Russia; Hillary Clinton was colluding with Russia, Joe Biden was colluding with Russia, not to mention China and the Ukraine. They impeach Trump for supposedly, perhaps, interfering in Ukrainian legal affairs and demanding a quid pro quo for aid. Yet Biden is on video boasting about interfering in Ukrainian legal affairs and demanding a quid pro quo for aid. They have called Republicans Nazis and Fascists for years; that’s the entire “Antifa” thing. Then when Gina Carano tweets a comparison of the left to the early Nazis, this is intolerable. She must lose her livelihood for it. They declare the right “anti-Semitic” while being anti-Semitic. They accuse the right of being racist, while making everything about race. They actually declare not being racist, racist. They claim the Republicans are for the rich and against the poor, while openly expressing contempt for the poor.  It is only too obvious there is a pattern here.

The principle is simple, and known since ancient times. When someone commits consciously to evil, to something they know is wrong, the truth becomes their enemy. They feel the need to get as far away from truth as possible. They will come to consistently say the opposite of the truth, and accuse the innocent of their sins.