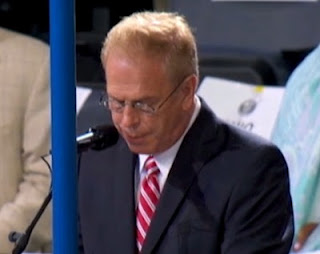 The Democratic party's attempt to re-insert God and Jerusalem into their platform on the fly was disturbing for many reasons.

Then, awkwardly, the delegates themselves would not go along. The amendment required a two-thirds majority, and on the voice vote, it clearly did not have it. So the Democrats presented the public spectacle of internal dissent, a rebellion of the party against its leadership. Worse, Obama put his own reputation on the line here. The chairman of the platform committee, Governor Strickland, used Obama's name as authority for the amendment. Making it clearly appear that the delegates were not prepared to follow Obama specifically. Hmmmm—even the Democrats are not big on their leadership...and prepared to say so publicly.

At the same time, the vote presented a public spectacle of something like half the party vocally objecting to either God or support for Israel, or both. It can, of course, be interpreted by their opponents either way, as seems more convenient. If read the latter way, it becomes a strong inducement for Zionist Jews to vote Republican; they have traditionally been a Democratic constituency. If read the former way, it alienates all theists. That's 70-80% of the American population, and at the same time this presumably kills any hope of gaining among Muslims any support they've lost among Jews. The loud public boos cancel out any good the platform amendment might have done to the Dems' reputation as either anti-Israel or anti-religion. But it leaves the harm of changing the platform on the fly.

Then the way the chair handled this revolt ... After repeating the vote, making it clear that he, too, did not hear the two-thirds necessary, and making it clearer to all that the party was in revolt against the amendment, Villaraigosa hesitated, seemed confused, and consulted with someone else on the podium. More evidence of executive incompetence, and arrogance. Those in charge had not even foreseen the possibility that the amendment would not pass on voice vote. They didn't know what to do. There was no plan. 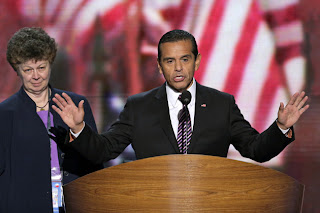 Then, after calling for the vote a third time, Villaraigosa obviously, and publicly lied that he now heard the two-thirds majority, and declared the motion passed. This announced to the nation that the Democratic party leadership had no compunction about breaking the rules or ignoring due process, were liars, and did not respect the popular will. That they were not, in fact, democrats, and not to be trusted.

Then the crowd booed. On top of everything else, the leadership seems to have clearly managed with this to annoy a large part of the party base. How hard are they going to work for the ticket now?

Could hardly have been less well done. Could be a historic moment. Could be the wheels coming off the bus.