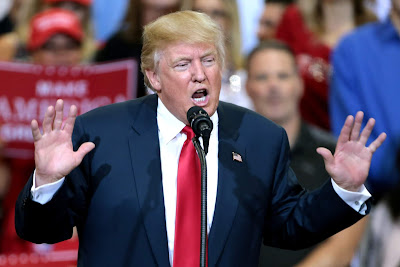 An ad hoc organization of psychiatrists and psychologists has apparently been formed to call for Donald Trump to be impeached on psychiatric grounds.

They claim that their examination of transcripts from the Mueller report “showed that the president lacked the ability to make rational decisions."

He has shown that his sense of worth is entirely dependent on the admiration from others, such as at the rallies of Trump’s base. Without this external affirmation, Trump has revealed that he feels, deep down, like a loser, a failure, weak, dumb, fat, ugly, fake, “crooked”. We know this because this self-denigrating pictures of himself, Trump projects onto others, whom he transforms into enemies, and compensates consciously by creating a grandiose image of himself as unique, a stable genius, entitled to special treatment, and better at everything than everyone else.

What makes Trump so dangerous is the brittleness of his sense of worth. Any slight or criticism is experienced as a humiliation and degradation. To cope with the resultant hollow and empty feeling, he reacts with what is referred to as narcissistic rage. He is unable to take responsibility for any error, mistake or failing. His default in that situation is to blame others and to attack the perceived source of his humiliation. These attacks of narcissistic rage can be brutal and destructive. A striking but not unusual example of his lack of caring and empathy is his policy of separating children from their parents at the Southern border. Additionally, he has made the reckless decision to allow an attack of our Kurdish allies, against all advice, shortly after announcement of the impeachment inquiry. These events are closely related and betray his extreme inability to tolerate any challenges against him.


This initiative is instructive in two ways. First, it shows how irresponsible and politicized our professional elites have become. And second, it shows how dangerous psychiatry can easily be to democracy and human rights.

Any competent psychiatrist must be aware that psychiatric diagnoses are pretty arbitrary and unreliable. If you must make a decision, you must, if somebody seems about to commit suicide or the like, but it is dishonest to claim you are authoritative. A recent study showed that half of a random selection of patients formerly diagnosed as schizophrenic were not, but instead suffered from anxiety. We actually have no way of knowing whether it was the first or the second of these diagnoses that was wrong, but either way, 50% were wrong. This is significant because these two diagnoses call for radically different treatments, and both the treatments used have dangerous side effects.

Imagine now applying such standards to making critical decisions of national importance, like impeaching a president.

And it is not just that psychiatrists often get the diagnoses wrong. We also do not know what the diagnoses mean. Psychiatric diagnoses are just lists of symptoms in the Diagnostic and Statistical Manual. Lists change with each edition. Whether there is any one underlying psychiatric “condition” conforming to any one list is pure speculation. If so, whether that condition is an “illness” is also demonstrably dubious. Homosexuality used to be in there. Obviously, any sort of political dissent or non-conformity could be in there—and probably has been. Republicanism, for example, could simply be declared a mental illness.

And there is more. The basic standard on which modern psychiatry and psychology is based is “normalcy.” Any deviation from the “normal,” which is to say the average, is classed as “illness.”

Now it is self-evident that anyone who rises to become president of the US is not mentally normal. Anyone who does an unusually good job at anything is by this fact demonstrably abnormal. Accordingly, “psychohistorians” have been able, by applying the same techniques used here on Trump, to demonstrate that Abraham Lincoln and Winston Churchill, for example, or Moses, or Muhammed, or Plato, or Michelangelo, or just about any prominent historical figure, were mentally ill. Of course they were; it goes with our definition.

Our leaders are therefore always going to be mentally ill, by present definition, and the charge of “mental illness” can therefore always be used against any political leader, or any person of prominence, that you do not like. Any intervention in politics by psychiatrists or psychologists is therefore harmful to the general welfare. If they do not know this, they are dangerously incompetent. If they do know this, they are dangerously corrupt.

Of course, a prominent leader can indeed go genuinely mad in the proper sense, of being delusional, hallucinating, of seeing things that are not there. If so, this is going to be readily apparent to those around him or her. Nobody needs a psychiatrist to know as much. And every system of government makes provision for this.

But the diagnosis given in the present case is not even superficially plausible. For example, this cabal writes that Trump’s “sense of worth is entirely dependent on the admiration from others.” That is true of politicians generally—always seeking to please the crowds. It is exactly how Trump differs from other politicians. He will confront and disagree with people directly, in public. He seems constitutionally not to need the approval of others to form and keep to his own opinions.

Trump has revealed that he feels, deep down, like a loser, a failure, weak, dumb, fat, ugly, fake, "crooked". We know this because this self-denigrating pictures of himself, Trump projects onto others.


This is schoolyard stuff: it is that old taunt “I know you are, but what am I?” Projection is a real thing—Jesus warns of it in the New Testament—but in order to level the charge, you must have evidence; otherwise it is you who are projecting. You must show that the people Trump calls losers, failures, weak, dumb, fat, ugly, fake, or crooked are not; and then that Trump is.

The fact that his taunts seem to resonate with the public is already evidence that Trump is not projecting. Yes, Pete Buttigieg really does look like Alfred E. Neuman. Yes, Marco Rubio really is short. If he were projecting, these cruel little japes would not be effective.


You really would want a psychiatrist to understand how projection works.

They then claim that Trump cannot bear any humiliation, and reacts with “narcissistic rage.” Yet, as above, he actually seems impervious to being humiliated; nothing shames him. Narcissistic rage? If Trump ever loses his temper, it has never been caught on camera. His sharp responses are always delivered calmly and in a matter-of-fact way; as though he were speaking for everyone. He is also notably quick to reconcile, never holding grudges. Witness his treatment of Ted Cruz, or Kim Jong Un, or China’s president Xi. This seems to suggest that his sharp responses are purely a negotiating tactic, calculated, and not expressions of emotion at all. Rather than being emotionally out of control, as the psychiatrists and psychologists suggest, Trump seems to have a remarkable control over his own emotions.

Perhaps this itself should be disturbing; but it is the opposite of what disturbs them.

They are also ignorant, it seems, of current events. They write: “A striking but not unusual example of his lack of caring and empathy is his policy of separating children from their parents at the Southern border.”

They are apparently unaware that this policy was also followed by previous administrations. It is required by present legislation: you cannot legally confine a child because their parent did something wrong. Trump’s emotions do not enter into it.

The likelihood of frequent abuse, on this evidence, is overwhelming.

No wonder, then, that public trust in the professional elites is on the decline.

So educate me. Simply making a claim without evidence looks as though you too are projecting.